WebEQ is a suite of Java-based software tools for authoring and displaying mathematical equations in a Web page. WebEQ consists of five components:

WebEQ Input Control is primarily useful in setting up dynamic mathematical Web sites that allow users to interactively manipulate mathematical equations. The details of installing and using the Input Control are relatively complex, since it requires some knowledge of using JavaScript and Common Gateway Interface (CGI) programming on Web servers. A detailed discussion of the Input Control is deferred to Creating dynamic math web pages: WebEQ: Input Control, which specifically deals with dynamic mathematical features. A discussion of the Editor and Publisher is provided under Authoring and editing MathML: WebEQ, which deals with MathML authoring tools. In this section, we confine ourselves to discussing the features of the Viewer Control, since that is the component relevant for displaying equations.

WebEQ Viewer Control provides a way of displaying interactive MathML equations in a Web browser. For the equations to be displayed in a browser, the user must have access to a set of Viewer Control class files. These files can be either installed locally on the client machine or automatically downloaded from the server each time you view a Web page that contains an equation. For details of how to make the class files available on a Web server or to install them on a client machine, see the WebEQ product documentation.

To be displayed by the Viewer Control, each equation must be enclosed in an applet tag. This tag is used in HTML to indicate an applet call and has the following important attributes:

The WebEQ Viewer Control recognizes a number of parameters that can be used to control specific aspects of how WebEQ should display the equation. Some of the important parameters are:

Several other input parameters control various aspects of the equation's appearance (such as its font size, color, alignment, or padding). However, you do not have to know the names of all the parameters since in most cases you will not be authoring Viewer Control applet tags by hand. You can instead create applet tags for any equation using either WebEQ Editor or Publisher. These applications allow you to specify the properties of an equation using menus or dialogs, and they automatically generate the applet tag for the equation with the appropriate parameter values included. 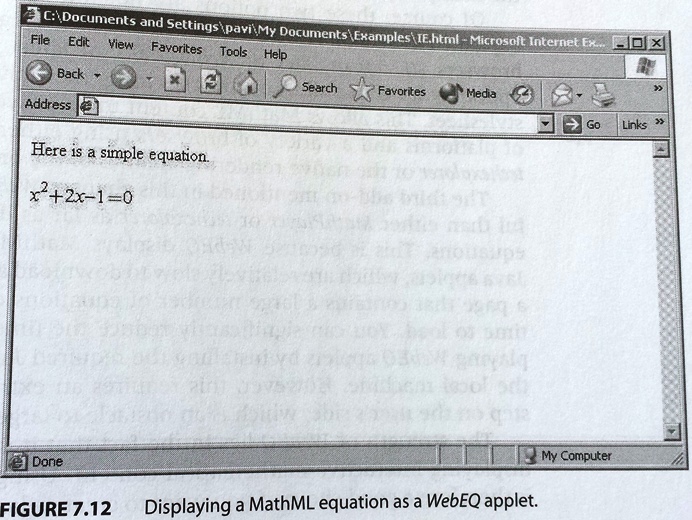 Figure: Displaying a MathML equation as a WebEQ applet.