A xs:string string; the input string in normalised form, either according to Unicode NFC or according to the indicated Unicode normalisation regulation.

Optional. A xs:string character string which shall be normalised according to one of the Unicode normalisation forms. If the empty sequence is passed on, the function returns an empty output sequence.

Optional. A xs:string string which must correspond to the identifier of an implemented normalisation regulation, otherwise an error is reported. In order to identify the identifier, $normalizationForm is, if appropriate, converted to upper case letters and normalised (leading and trailing space characters are removed). The passing on of an empty string as second argument deactivates the normalisation.

A string containing compound Unicode characters (composite characters) is reasonably normalisable. This includes, for example, ligatures, characters with accents or umlauts. So, for instance, the lower case letter ä can be represented by the single character U+00E4 LATIN SMALL LETTER A WITH DIAERESIS or as a combination of the two characters U+0061 LATIN SMALL LETTER A and U+0308 COMBINING DIAERESIS. The possible variants can practically make the result of a direct string comparison of two (also in principle to be considered as equal) character strings unpredictable.

The Unicode normalisation forms ensure that all character combinations and combination characters are converted to uniformly defined characters or character strings before a possible comparison.

Mere ASCII text, and consequently any programme source code, remains unchanged after an Unicode normalisation (ASCII does not contain composite characters). Therefore, a normalisation is not harmful here, but only redundant.

The standard requires from an application only the support of the (most common) normalisation according to NFC (Unicode Normalization Form C, canonical composition) which is also favoured by the W3C. This regulation is used by default, if no second argument is passed on, which means a normalisation form is not explicitly requested:

In addition to NFC, there are further regulations which can (but do not have to) be known by the application: 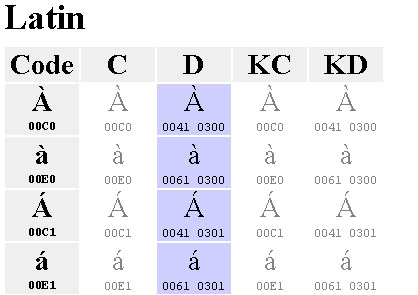 There is a further form not belonging to the Unicode standard and possibly supported by some applications:

If a second argument is passed on to the function, but it is the empty string, a normalisation does not take place (which means also no default normalisation according to NFC), but the input string is returned in unchanged form.

The function is not avalilable.

Copyright © Galileo Press, Bonn 2008
Printing of the online version is permitted exclusively for private use. Otherwise this chapter from the book "XSLT 2.0 & XPath 2.0" is subject to the same provisions as those applicable for the hardcover edition: The work including all its components is protected by copyright. All rights reserved, including reproduction, translation, microfilming as well as storage and processing in electronic systems.