MathType is a powerful equation editor that provides a simple graphical interface for authoring equations of any complexity. The resulting equations can be converted into several different formats for insertion into Web pages and other documents. You can choose from both image-based formats and text-based markup (such as LaTeX or MathML).

MathType is the professional version of the Equation Editor program that is included with Microsoft Word and Corel WordPerfect. The principal differences between MathType and Equation Editor are that MathType has:

The MathType interface (see the following figure) consists of a series of palettes for pasting symbols and equation templates into a document. The symbols and templates are organized into groups that you can access on the taskbar via pop-up menus. There are templates for creating all the major types of mathematical notation, including fractions, radicals, subscripts, superscripts, sums, products, integrals, and matrices. 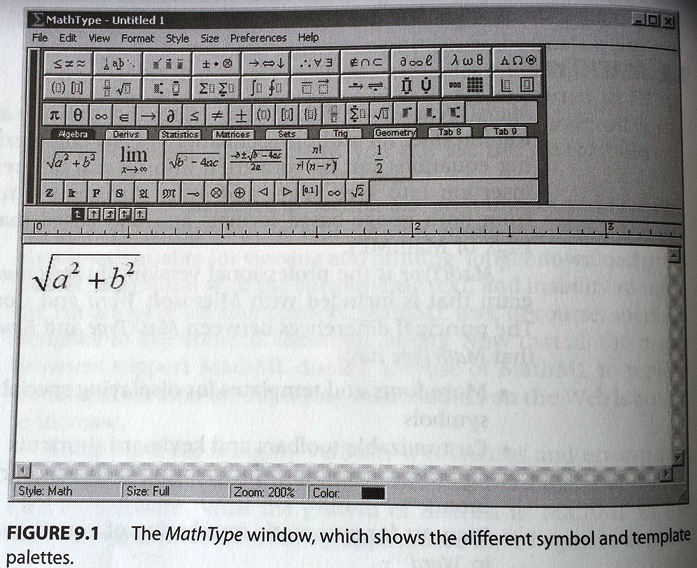 Figure: The MathType window, which shows the different symbol and template palettes.

To construct an equation, you click the button for the desired template from the taskbar. Doing so inserts the template into the MathType window with empty placeholders for content, which you can fill by typing text from the keyboard or inserting other templates. You can construct equations of any complexity using the templates as building blocks, adding and nesting templates as desired. MathType automatically applies common typesetting conventions for font style, size, spacing, alignment, and other parameters, based on the context. If needed, you can also adjust any of these parameters manually.

When you have finished creating an equation, you can either paste it into another application like a word processor or convert the equation into an image (in EPS, GIF, or other formats) or a text markup language like MathML or LaTeX.

MathType also provides good support for including mathematical symbols and other extended characters in equations. It includes fonts for representing several hundred of the most commonly used extended characters. In addition to the standard Symbol font, MathType includes the Euclid family of fonts, which are similar to the Computer Modern fonts that are widely used for TeX and LaTeX documents. MathType also includes a proprietary font called MTExtra. You can search for a specific symbol using the Insert Symbol command under the Edit menu. This brings up a dialog (see the following figure) that lets you browse all characters for all fonts installed on your computer. You can also search for characters (in any font) whose name matches a specified keyword. 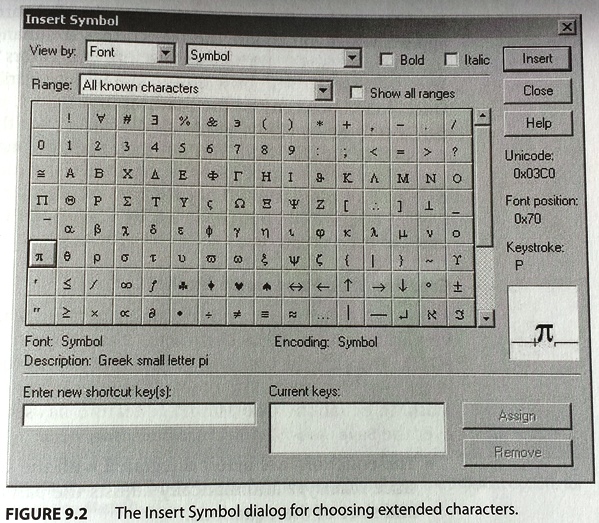 The latest version of MathType for Windows, Version 5.0, includes complete support for MathML 2.0. Using the Translators dialog (see the following figure) to specify a suitable translator, you can copy the MathML markup for any equation into the clipboard. This dialog appears when you choose the Translators command listed under the Preferences menu. There are separate translators for generating MathML markup with or without a namespace attribute or prefix. Once you choose any of the MathML translators, each time you cut or copy an equation, the MathML markup for that equation is copied into the clipboard. You can then paste the markup into any other document or application. A separate translation file handles each type of conversion. If needed, you can further customize the type of MathML output produced by editing the translation files used for the conversion. 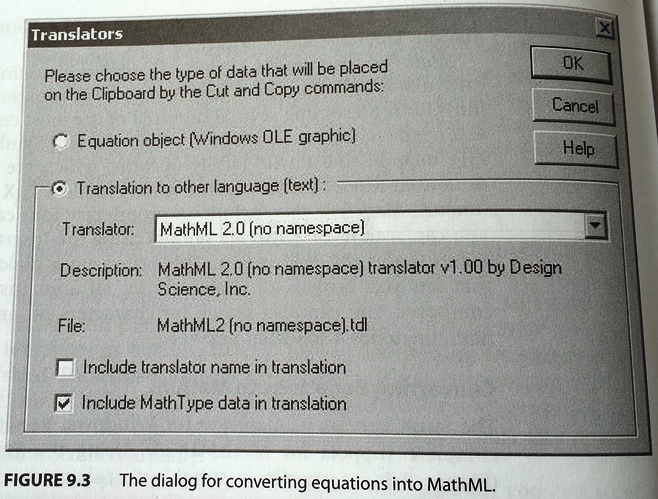 Figure: The dialog for converting equations into MathML.

MathType 5.0 includes a special technology called MathPage for converting Microsoft Word documents that contain equations into HTML. You have the option of including MathType equations present in the Word document into the Web page, either as GIF images or as MathML equations. The MathPage feature has several advantages over the Save As HTML feature built into Word:

To save a Word document as an HTML file using the MathPage feature, choose the Export to MathPage command from the MathType menu in Word. This brings up a dialog (see the following figure) that allows you set various export options. You can generate MathML adapted for viewing using techexplorer, WebEQ, MathPlayer, Amaya, and Mozilla. For each type of rendering environment, MathType automatically adds any extra markup needed and generates elements with the proper namespace. Version 5.1 of MathType (which was in beta testing at the time this book was written) also includes as an export option the ability to include a declaration for the Universal MathML stylesheet. As discussed under The Universal MathML stylesheet, this is the best way to author MathML documents that are viewable on a wide variety of platforms and browsers. 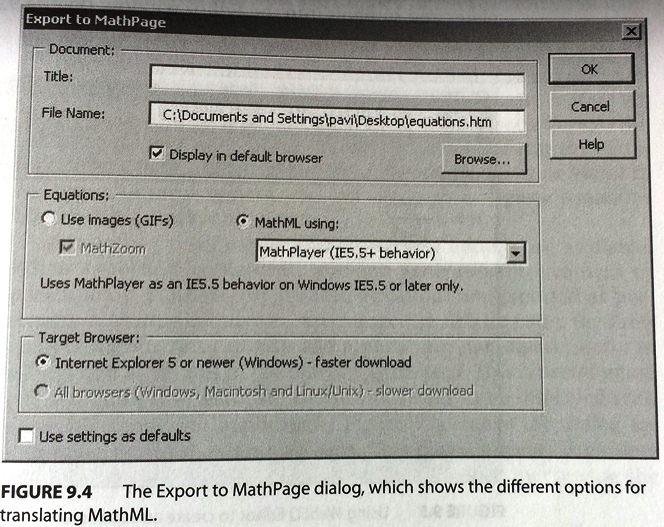 Figure: The Export to MathPage dialog, which shows the different options for translating MathML.