Scientific Word offers a WYSIWYG environment for creating technical documents that contain typeset equations integrated with text. Text formatting and mathematical typesetting features are both integrated within a single application. One advantage of this is that the resulting document can be automatically converted into LaTeX, which is convenient for scientists and researchers who need to prepare articles in LaTeX for submission to a journal. Version 4.0 of Scientific Word includes support for exporting documents as HTML with MathML. Most presentation tags defined in MathML 2.0 are supported, but content tags aren’t.

A Scientific Word document can be in one of two modes: Text mode, which is used for entering ordinary text, and Math mode, used for entering equations. You can toggle between Text and Math modes using a button on the toolbar. When you type text in Math mode, Scientific Word automatically recognizes operators, numbers, variables, and mathematical functions, and formats them accordingly. For example, alphabetic characters are italicized, names of standard mathematical functions and numbers are shown in an upright font, and space is automatically added around operators such as + and =.

The user interface of Scientific Word is shown in the following figure. There are two Math toolbars that contain buttons and palettes for entering equation templates and extended characters. There are also templates for most common mathematical constructs, including fractions, radicals, subscripts, superscripts, sums, products, integrals, and derivatives. There are also palettes for most common mathematical symbols, including Greek and Latin characters, operators, arrows, delimiters, and other technical symbols. Some of these palettes are shown in the figure The Symbol toolbar along with some of the palettes for entering extended characters. 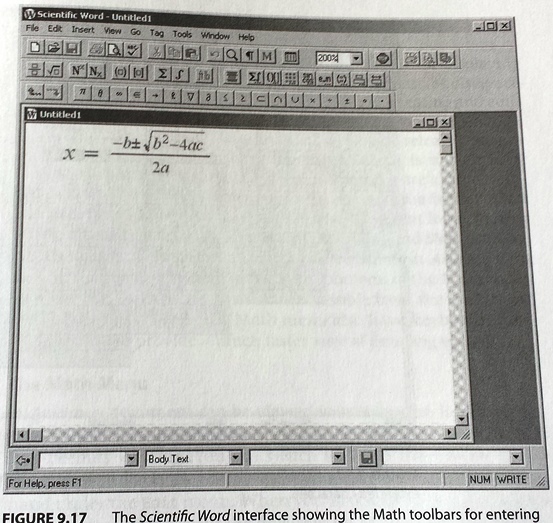 Clicking one of the buttons in the Math toolbar inserts the corresponding symbol or equation template in the document. You can then construct expressions by typing text in the placeholders. By default, equations are entered in inline form, but you can switch to display form by clicking a button on the toolbar. Inline equations have various features optimized for better integration with the surrounding text. For example, numerators and denominators in a fraction have a smaller font size, and the limits of integrals are shown as subscripts and superscripts. Display equations, on the other hand, are shown centered and in a larger font size with the limits of integrals shown as underscripts and overscripts. You can control the display properties using the Operator dialog, accessible by clicking the button with the

icon in the Math toolbar. 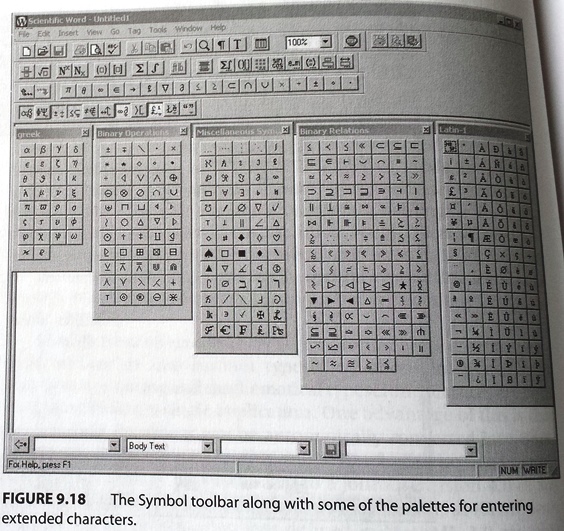 Figure: The Symbol toolbar along with some of the palettes for entering extended characters.

Once you have created a document, you can convert it to LaTeX format by using the built-in LaTeX typesetting features. You can also convert the document to HTML with the equations saved as MathML using the File → Save As → HTML + MathML command. However, there is no support for importing MathML equations from another application, unless the imported document was also created using Scientific Word.