IBM's techexplorer was one of the first tools released that enabled users to display MathML in Web browsers. It can directly render MathML, as well as TeX and LaTeX markup, in both IE and Netscape. techexplorer works as a plug-in for Netscape and as an ActiveX control for IE. Versions of techexplorer are available for most platforms, including Windows, Macintosh, and Unix. The current release, Version 3.1, supports most of the presentation and content tags defined in MathML 2.0. You can also use techexplorer as an ActiveX control to display interactive equations in Microsoft applications such as Word, Excel, and PowerPoint.

techexplorer is available in two versions: a free Introductory edition (which has the basic features needed for viewing scientific documents) and a Professional edition (which adds some extra features such as support for printing as well as scripting using JavaScript and Java). techexplorer is much more than a viewer for scientific documents. It supports a special set of commands that can be included as markup in a document to implement various features, such as the following:

These features make it possible to use techexplorer for creating Web pages with dynamic mathematics. The Professional version of techexplorer includes a special set of class libraries and an implementation of the W3C's DOM. You can use these to manipulate various parts of a document in response to user events such as mouse clicks by writing appropriate JavaScript and Java programs. Some examples of using techexplorer to display interactive mathematical content are given under Creating dynamic math web pages: IBM techexplorer.

Once you install techexplorer, your browser is automatically configured to view files with the extensions .mml, .tex, .ltx, and .tcx (for MathML, TeX, LaTeX, and techexplorer documents, respectively). Whenever you open any document with these file extensions, techexplorer will be used to display the entire document. Alternatively, you can include instances of MathML, TeX, or LaTeX markup in an HTML document.

If you right-click in a blank area inside the techexplorer window (or control-click on Macintosh) a context menu (see the following figure) appears. This menu gives you access to several basic features of techexplorer such as navigating within a document, printing (available in the Professional edition only), and changing options. 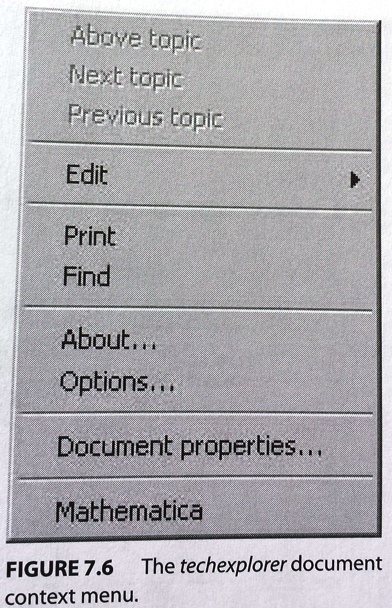 If you click on the Options menu, the dialog shown in the following figure appears. This lets you set options to control various features of how a document is displayed (such as colors, fonts, and so on). You can specify different option settings for regular text and mathematical expressions. For example, using the MathAutoColor tab, you can cause mathematical expressions to be displayed with a different background and foreground color from the surrounding text. You can also set operators, delimiters, and numbers to each appear in a different color. 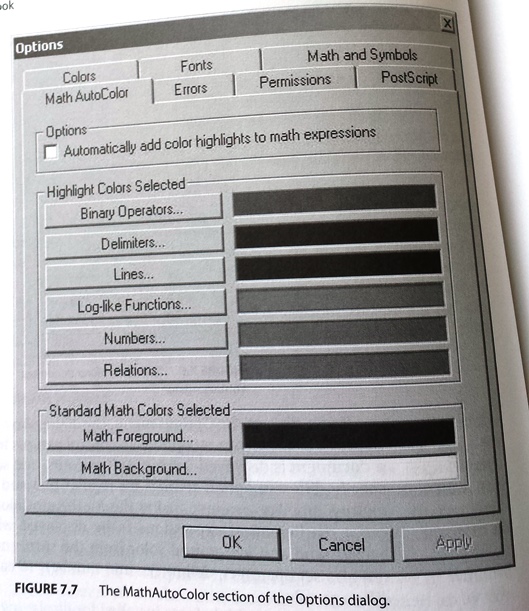 Figure: The MathAutoColor section of the Options dialog.

If you have multiple fonts installed for displaying mathematical symbols, you can specify a given set of fonts as a default by using the Math and Symbols section of the Options dialog.

The following sections provide information on how to author HTML documents containing MathML content that can be displayed by techexplorer. The details of how MathML markup should be embedded in the HTML document vary depending on whether the document is to be viewed in Netscape or IE and whether you wish to use techexplorer as a plug-in, an ActiveX control, or an IE Behavior.

In Netscape, content to be rendered by techexplorer must be included in an HTML document using the embed tag. This element is used in HTML to enclose any content that should be rendered using a plug-in. Some of the important attributes of the embed element are: 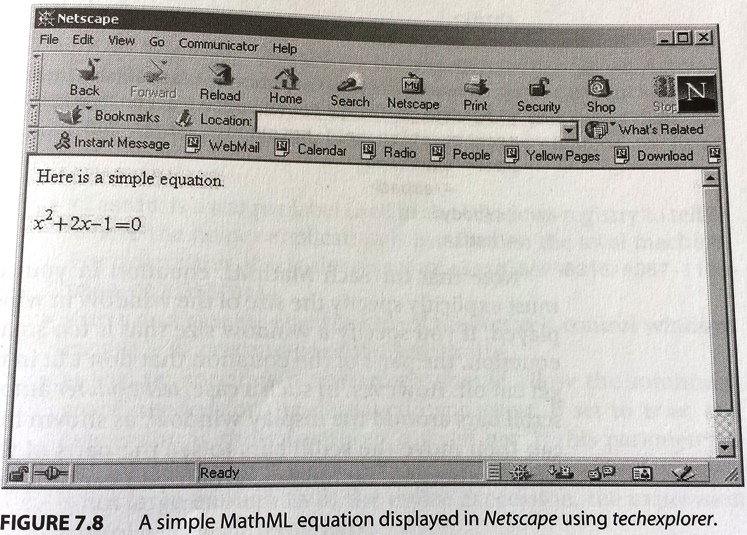 Alternatively, you can include the MathML markup in a separate document and refer to the document using the src attribute of the embed tag. In the following example, the MathML content is placed in a file called equation.mml, which is in the same directory as the HTML document.

Example: Using the src attribute to specify a MathML equation in a separate file.

Note that for each MathML equation in your document, you must explicitly specify the size of the window in which it will be displayed! If you specify a window size that is too small to display the equation, the parts of the equation that don't fit in the window will get cut off. However, in such a case, techexplorer automatically places scroll bars around the display window, as shown in the following figure. You can then move the scroll bars to see the parts of the equation that would otherwise be hidden. When you use techexplorer with IE on Windows, it is possible to have the size of the window calculated automatically, as explained in the next subsection. 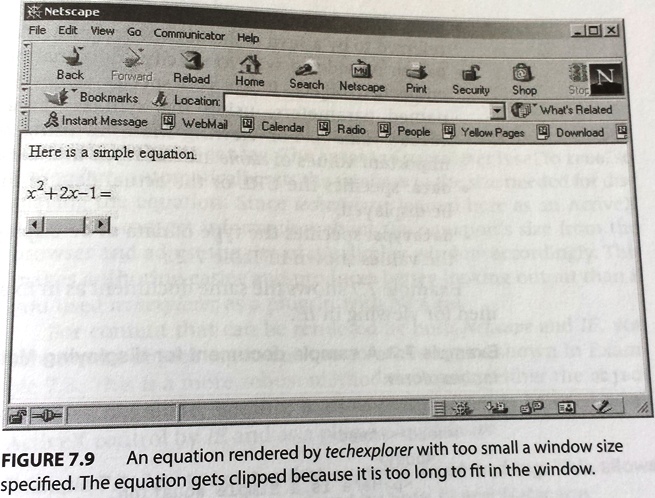 Figure: An equation rendered by techexplorer with too small a window size specified. The equation gets clipped because it is too long to fit in the window.

For IE on Windows, techexplorer is also implemented as an ActiveX control. Hence, to view MathML content you can enclose the MathML data in an object element instead of the embed element. Some of the important attributes of the object element are listed here:

The following example shows the same document, modified for viewing in IE.

Notice that the width and height attributes are not specified explicitly in the object tag. The autosize parameter is set to true, so techexplorer automatically sets the window to the size needed for displaying the equation. Since techexplorer is used here as an ActiveX control, it can get information about the equation's size from the browser and adjust the size of the display window accordingly. This makes authoring easier and produces better-looking output than if you used techexplorer as a plug-in with Netscape.

For content that can be rendered by both Netscape and IE, you can use the object tag to enclose an embed tag, as shown in the following example. This is a more robust method than using either the object or embed tag alone, because it allows techexplorer to be used as an ActiveX control by IE and as a plug-in by Netscape.

Example: An object tag that contains an embed tag. This allows the MathML markup to be rendered by both IE and Netscape.

Although you can use the AutoSize parameter to solve the problem of adjusting the window size to fit the equation, another limitation of techexplorer remains: it renders all equations with an opaque background. If you change the default background color of your document using the browser's option settings, the background of the techexplorer window can be explicitly seen since it appears in a contrasting color (see the following figure). You can overcome this problem by using techexplorer as a Behavior, as explained in the next section 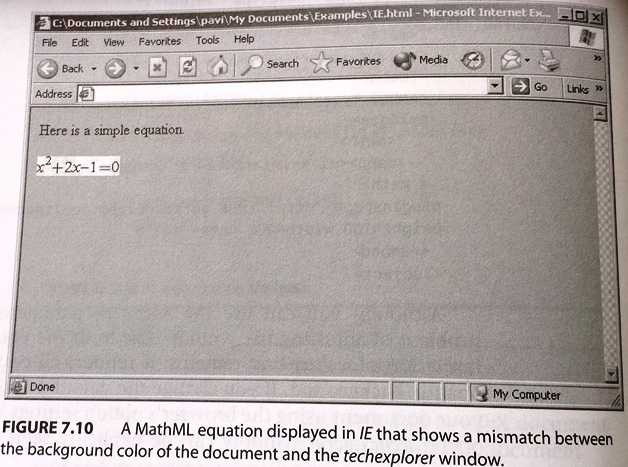 Figure: A MathML equation displayed in IE that shows a mismatch between the background color of the document and the techexplorer window.

IBM techexplorer can also be used as a Behavior for IE. As explained in the discussion of MathPlayer, IE Behaviors allow you to associate a given type of embedded content with a specific rendering application. Moreover, the application has access to the APIs of the browser, and can thus get more information about the Web page, which allows for better integration of the plug-in content with the surrounding HTML data.

To use techexplorer as a Behavior, you have to author the document as shown in the following example.

Example: A sample document for displaying MathML in IE using techexplorer as a Behavior.

The import processing instruction says that any element with the namespace prefix m: should be displayed using the software whose ID is techexplorer. The MathML expression is then included in the document with each MathML element in the form of a qualified name with the m: prefix. A namespace declaration in the html element associates this prefix with the MathML namespace.

The following figure shows an equation rendered in IE as a techexplorer Behavior. Notice that the background color of the techexplorer window is automatically adjusted to match that of the entire document, instead of rendering the equation with an opaque background. 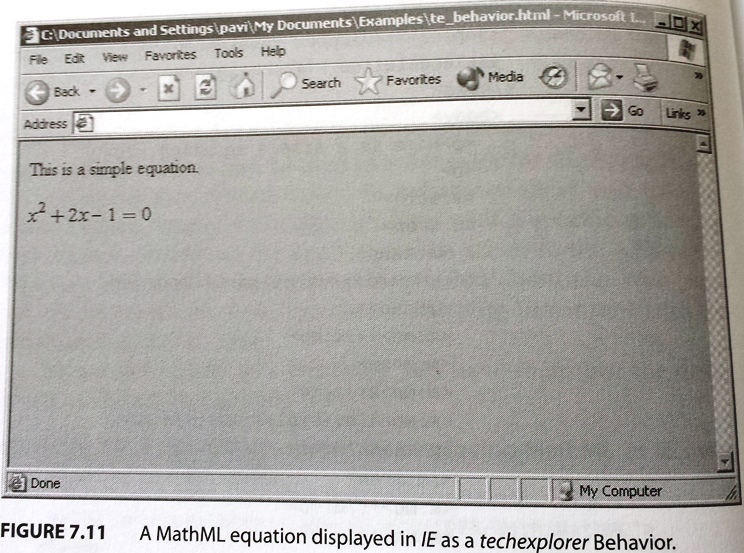 Figure: A MathML equation displayed in IE as a techexplorer Behavior.